Brewing my first batch of mead

Our last team sprint took place in London, and there I (re) discovered mead, in a light carbonated form. It's bottled by Gosnells Mead and is absolutely delicious. This sparked my interest, and I decided to get started brewing mead myself, since it's almost impossible to find in Switzerland.

Good news: mead is apparently super easy to brew - it's been done for millenia using the most primitive tools and equipment, so surely, I can brew my own as well! 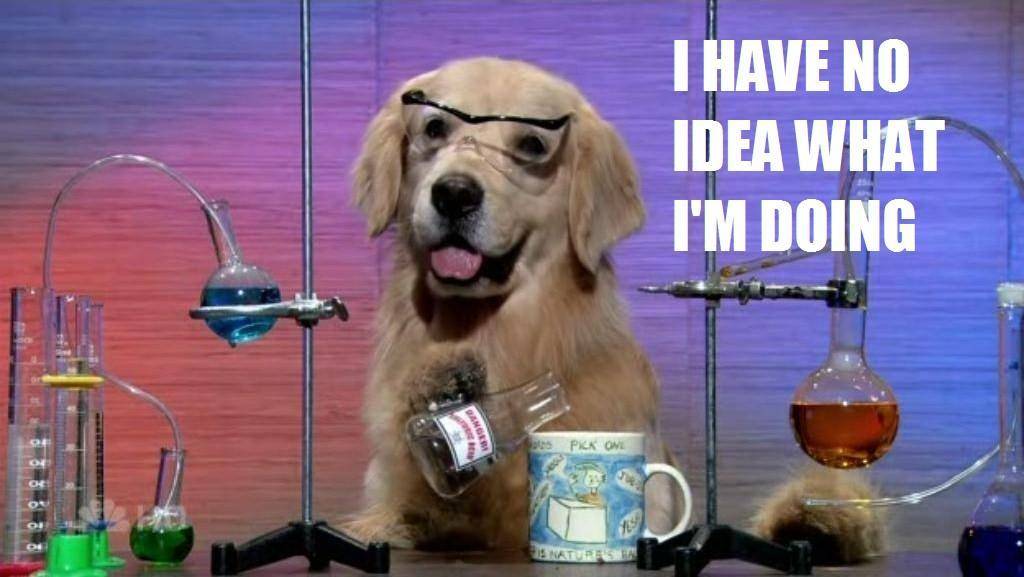 Since it's my first batch ever of anything at all and I have no idea what I'm doing, I decided to go for a foolproof spiced mead recipe that uses very easy to find ingredients, including trivially found baker's yeast instead of harder to acquire brewer's yeast. Real mead brewers will probably think it's wrong (or worse), but hey, I'll learn how to drive before I start worrying about tuning my engine :)

The carboy (yay, new vocabulary!) I bought is 15 liters, so about 4 gallons. I therefore scaled my recipe as follows:

Yet another advantage to living in the countryside: my local farming equipment store offers everything you might need to brew your own stuff. I suspect my neighbours (actual farmers) to all brew their own apples, prunes or grapes and then illegally distill them for giggles. I'm not going that far, but the equipment was easy to get anyway.

I bought the smallest carboys I could find (two of them), sealed food-grade plastic containers of 15 liters. The same store had the same brand of containers up to "big enough for me to walk in". I didn't exactly have space for that in my car, so I went with the safe and reasonable first batch size of "as small as I can" :)

I plan to brew a single carboy, but they were cheap so I bought a second just in case.

Other items needed are airlocks. There are deceptively simple mechanisms, basically liquid-filled plumbing trap that lets fermentation CO² out when the vessel's pressure is high enough.

I also needed some powerful sanitizer that doesn't leave a taste. I went the nuclear route and bought bleach, that I used in obviously very diluted form.

Obviously, getting large quantities of honey is not cheap, but I can certainly get that relatively easily form neighbouring farms. However, raw honey can have its own yeast and impurities, so since it's my very first batch, I went with homogenized, store-bought honey.

I bought 8 kg of honey from my local supermarket. All of whatever they had most and looked tasty and liquid.

I'm pretty sure I'm on some sort of watch list now.

I'll use only 6,5 kgs, but I originally miscalculated the quantity (I thought the carboys were 19l instead of 15, and didn't double check before leaving for the store).

The rest of the ingredients were easy enough to buy - oranges, cinnamon, raisins, and cloves. 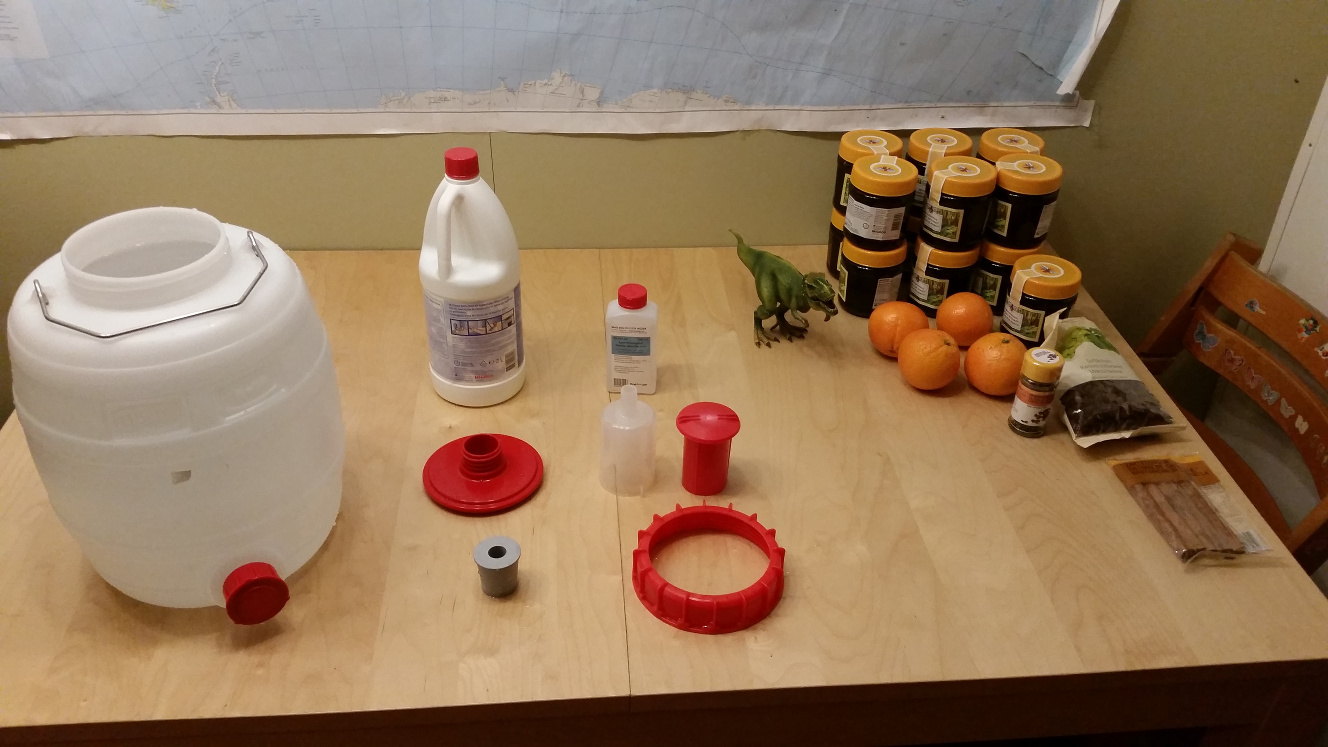 I did spend a long time considering whether to buy specialist yeast (brewer's yeast, ideally champagne yeast or mead-specific yeast), but all the Swiss online stores were sold out, and Amazon won't ship yeast to me (probably because of tricky customs).

The only place that would ship them to me gave me a delivery estimate of several weeks.

I decided to go with my locally made baker's yeast, as the recipe I chose said it'd be OK.

Putting it all together

Shopping is over, time for preparation.

As every brewing website on the planet will tell you, it's super super important.

I went with a good old fashioned vinegar-bleach mix, since again, "professional" sterilizer was hard to order/get (although looks awesome and certainly is much safer). Unscented bleach, of course.

Warning: mixing bleach and vinegar is a very VERY bad idea. Never do this directly (it creates very toxic fumes - as in chemical weapon level of toxic).

I filled my carboy with tap water (15 liters), and put everything I needed to sterilize in there. A couple of pieces didn't fit so I also filled a salad bowl full of water next to it. 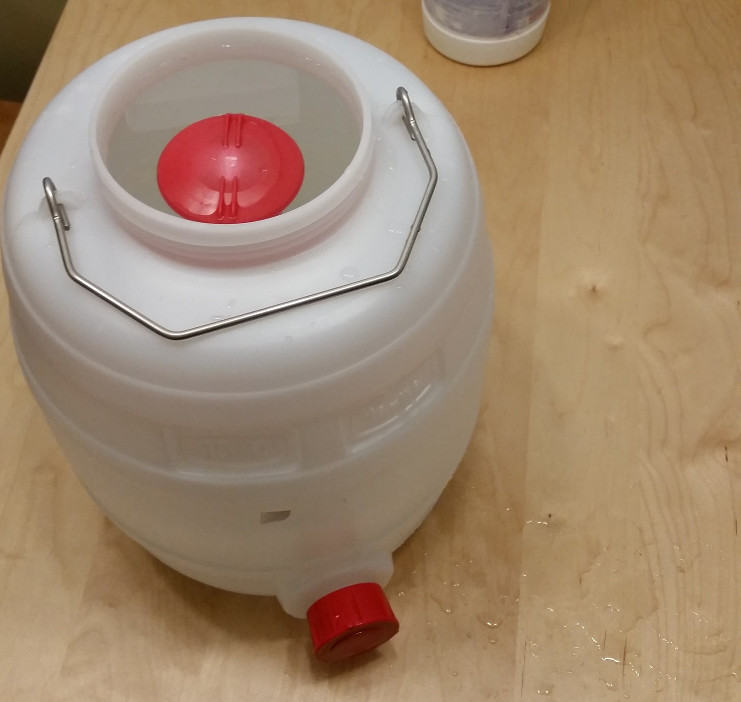 Add 2 table spoons of bleach to the carboy, and one to the salad bowl. Same with vinegar (2 and 1 table spoons respectively). 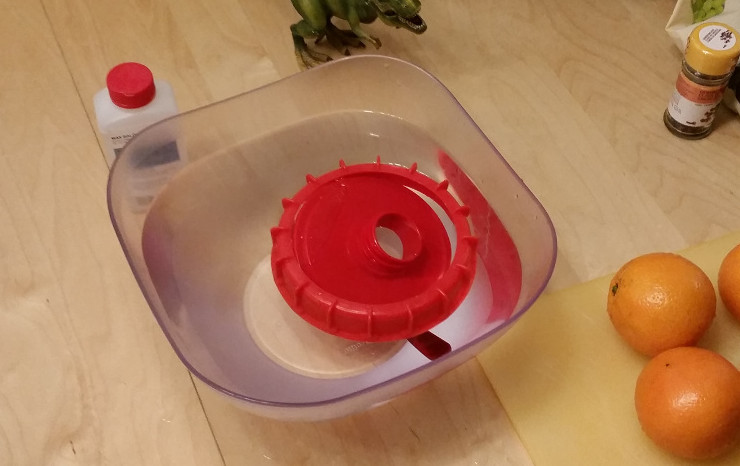 Once it sat long enough, empty everything of water and let it air dry for a few minutes (I waited 10).

Diluting the honey is much easier with hot water, so I filled my electric kettle and boiled a bunch of water. I put about 2 liters of boiling water in the carboy, then had fun emptying as much of the honey pots in there as I could. 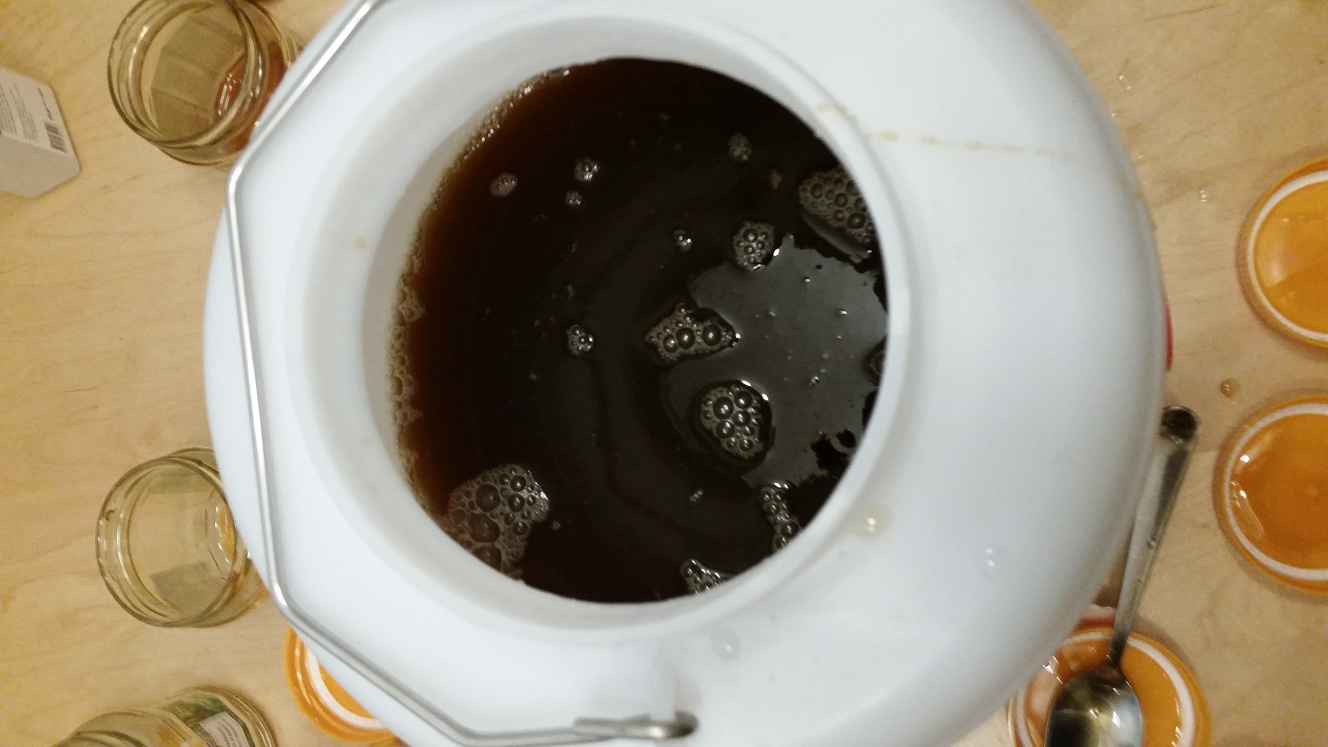 As per the recipe, I washed my oranges very well, and cut them in eights before throwing them (skin and all) in the carboy. The cloves and cinnamon were added, and I ended up putting the very scientific "2 handfuls" of raisins in there.

No idea how much that actually is :)

I filled the carboy to almost the top (leaving room for eventual foam to form) with cold water. The temperature was about 30°C, and I let it cool down further to about 25°C before adding the yeast.

Yeast came in a gooey-doughey cube, and I put half of it in the carboy (about 20 grams).

I closed the airlock and put that in a corner of the room while I cleaned the huge mess I created.

Fermentation being a very chaotic process, most websites give a rather large time frame for your must (the mixture of honey and water) to start fermenting: between 20 minutes and 3 hours. Some website tell you to wait 24 hours, up to 72 hours (!) before you start wondering what's up.

The way you can tell whether fermentation is occurring is to check your airlock for bubbles - fermentation creates CO² as a byproduct, and the purpose of your airlock is to let it escape, while preventing potentially contaminated air from entering.

I left my carboy overnight, and came back in the morning to an airlock still showing no signs of any bubbles.

Assuming the fermentation failed for some reason, I stirred my must and added another two handfuls of raisins (their sugar is easier for the yeast to eat, so it acts as a natural booster in case your yeast is struggling).

How to properly fit an airlock

I finally realised I installed my 3 parts airlock wrong - silly me! 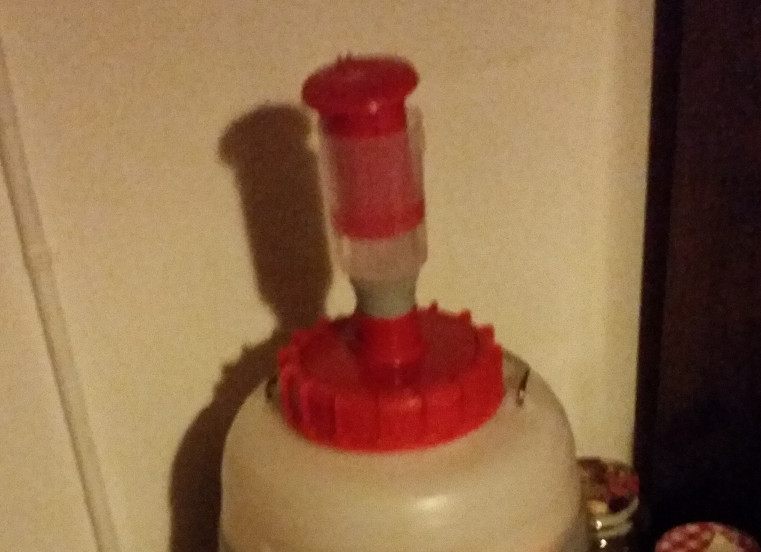 I misunderstood how the airlock worked, and supposed it was enough to let gravity push the mobile part of the lock (the red cylinder on top) back down, but as it turns out, it isn't. The CO² pressure accumulating under that part is strong enough to lift the light plastic piece completely out of the water, and therefore, no bubbles are visible.

Adding a rubber band to hold the mobile part in place yields immediate results: after a few seconds, a large bubble sprayed water in my face. The airlock needs just a little bit of liquid to work properly - and I put way too much in, so it splashed out happily until reaching the optimal level. 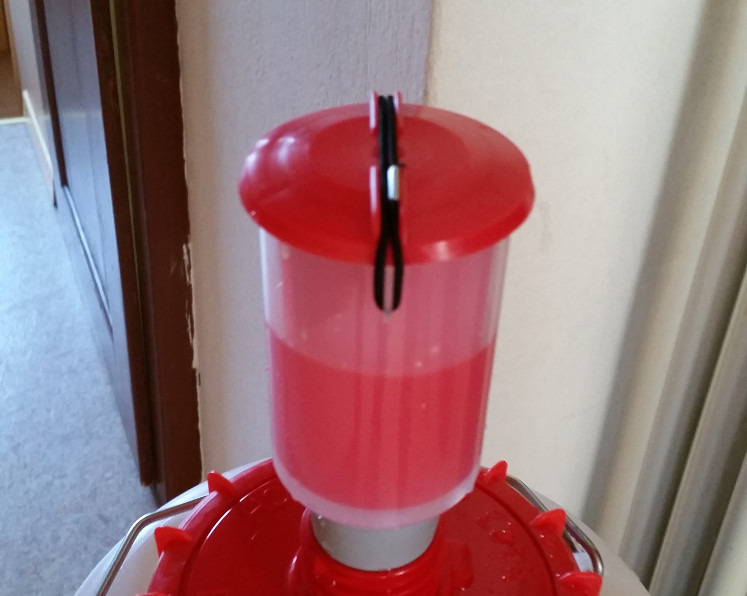 The last part was to find a suitable place to leave the carboy for two months.

Space is rarely an issue here (I live in an old foundry), but finding a room that would stay at a relatively stable 20°C proved to be a bit more challenging than I thought, especially during the cold months of winter and spring. Of course, the old foundry is not heated...

Fortunately I bought the smallest possible carboy, so I managed to fit it in a cabinet, close to a radiator. Since yeast doesn't like light, the fact that it's a seldom-used cabinet makes it even more appropriate.

If that batch succeeds, I might start looking at refurbishing part of the foundry into a brewery - but that'll be if and when :) 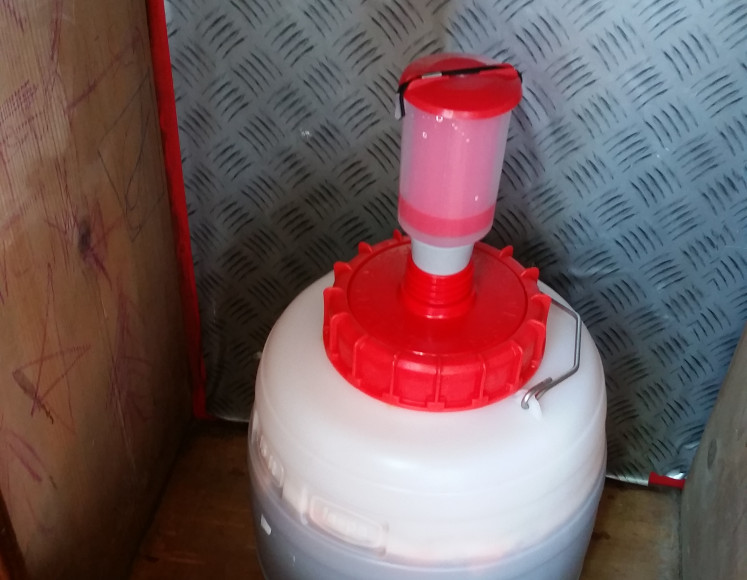 See you in two months!

That's it for the preparation, I now have to do pretty much nothing at all for a couple of months!

I'll write another blog post when it's time to see what mother nature brewed for me. In the mean time, feel free to leave a comment on Reddit !